The History of Dr. Martens


Dr. Martens’ appeal to people who have their own individual style but share a united spirit – authentic characters who stand for something. People who possess a proud sense of self- expression. People who are different.

On a stylistic level, Dr. Martens’ simple silhouettes allows their wearers to adopt the boots and shoes as part of their own individual and very distinctive style; on a practical level, their famous durability and comfort make them ideal for the unforgiving world of gigs and street fashion; and then finally on an emotional level, they are a badge of attitude and empowerment.

However, it wasn’t always this way: Dr. Martens were originally a modest work-wear boot that was even sold as a gardening shoe at one stage. So, how did this utilitarian boot transform into one of the most culturally relevant brands of the modern era? It is an interesting and unique story...

The Beginnings 'of an Icon'
Born From Tradition & Authenticity

Starting in 1901, the Griggs family were known for making boots in the small town of Wollaston, Northamptonshire in the English Midlands. They were at the very heart of the English shoe industry and for six decades Griggs’ footwear earned a solid reputation as sturdy, durable work boots.

The Beginnings 'of an Icon'
Born From Innovation

The story then switched to post-war Munich, 1945 and Dr. Klaus Maertens, a 25-year-old soldier. While convalescing from a broken foot he created a unique air-cushioned sole (rather than the traditional hard leather sole) to aid his recovery. Using a salvaged cobbler’s last and a needle, Maertens made a prototype shoe and showed it to an old university friend and mechanical engineer, Dr. Herbert Funk.

The two went into partnership by using disused military supplies to begin producing their unique shoes. By 1947 they began formal production and within a decade had a booming business, mostly selling to older women. In 1959, they decided it was time to advertise their revolutionary footwear invention in overseas magazines. 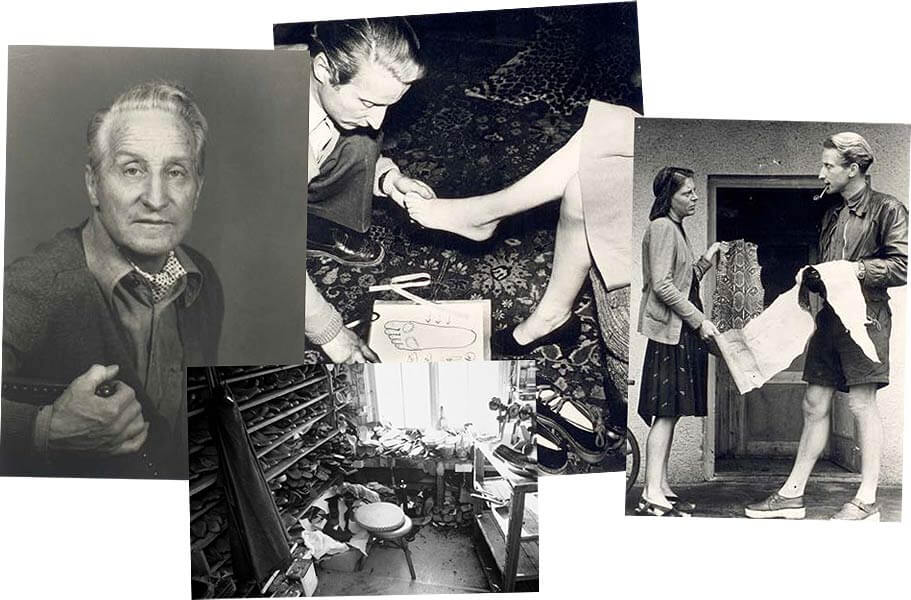 The Beginnings 'of an Icon'
Born From Ingenuity

Back in England, the Griggs company was now being run by the third generation of the family, Bill, along with brothers Ray, Colin and son Max. Whilst scanning the pages of a shoe trade magazine, Bill’s eye was caught by the German’s advert for their innovative air- cushioned sole.

An exclusive license was acquired and a few key changes made, including an altered heel, a bulbous but simple upper, a distinctive yellow welt stitch, a two tone grooved sole edge and a unique sole pattern. The boots were branded as ‘Airwair’ and came complete with a black and yellow heel loop featuring the brand name and the slogan “With Bouncing Soles” (based on Bill Grigg’s own handwriting). Taking its name from date of its inception, April 1st, 1960, the eight-holed 1460 Dr. Martens boot had arrived.

The 1960s – the decade in which the Dr. Martens boot was born – saw an unprecedented wave of change, new ideas, cultural upheaval and eventually social revolution. This radical atmosphere also witnessed extravagant and often exotic fashion, an odd backdrop for the birth of such a functional work-boot ... but then Dr. Martens has always kicked against the norm.

"Dr. Martens' First Few Years of Existence Was Very Much That of A £2 Work-Wear Boot"

Initially worn by postmen and factory workers, Dr. Martens’ first few years of existence was very much that of a £2 work-wear boot, selling solid quantities to Britain’s working classes. Then something incredible started to happen..

Without any warning or intent, Dr. Martens were suddenly picked up by early multi-cultural, ska-loving skinheads – who proudly championed British working class style. Shortly after, Pete Townshend of The Who became the first high profile individual to wear them as a symbol of his own working class pride and rebellious attitude. In so doing, both first generation skinheads and Townshend altered the course of the brand’s history, changing this functional work-wear boot into a subcultural essential.

The decade of glam, punk, Two Tone and early goth saw British youth culture mushroom into countless distinct tribes. Each successive new tribe who adopted the boot subverted the style of the previous wearers – yet large sections of the anti-establishment underground continually championed Dr. Martens. By the end of the decade the boot had become a fierce symbol of self-expression at the very heart of British youth culture.

Trend for Girls Buying Then Customizing The Simple 8 Eye Boot

With Britain plagued by anti-government riots and social resentment, youth culture rose up from the streets with yet more highly visual and individual tribes such as psychobilly, grebo and scooter boys.

Sales of small men’s size boots alerted Dr. Martens to a street trend for girls buying then customizing (usually with florals) the simple 8-hole boot. Meanwhile, US Hardcore musicians touring the UK began to take pairs of DM’s back to the west coast, thus inadvertently starting American subculture’s adoption of the brand.

Grunge turned the mainstream music world on its head and took Dr. Martens along for the ride. Back in Britain, Britpop rebelled against this so-called ‘loser kid’ apathy but did so in the same boots, the 1460.

The Revitalization of the Famous Brand Began

Shortly after the brand’s fortieth birthday, sales declined so dramatically that all but one of the UK factories had to be closed to stave off bankruptcy. Then in 2003 the revitalisation of the famous brand began with high fashion designers from around the globe re-interpreting and customising the classic 1460 boot.

In 2007 the resurgence continued when the original Cobbs Lane factory in Northampton factory recommenced the manufacture of hand-made Dr. Martens Originals.

Five Decades That Have Witnessed The Brands Adoption by Diverse Individuals

In the era of the global village and social media, every aspect of youth culture and subcultural style has changed. Yet diverse individuals, fans and subcultures still champion Dr. Martens, attracted by its unique alternative appeal and authenticity in a world of homogeny.

In 2010 a revitalised Dr. Martens celebrated its fiftieth anniversary: five decades that have witnessed the brand’s adoption by a diverse range of tribes, celebrities, musicians and free-thinking individuals – each subverting and twisting the boots and shoes to their own personal needs, attitudes and identity.

MUSIC IS THE HEARTBEAT OF THE BRAND

Without music, Dr Martens would have remained a workwear boot.

The music of tribes who wear Dr. Martens has become inseparable from the brand itself.